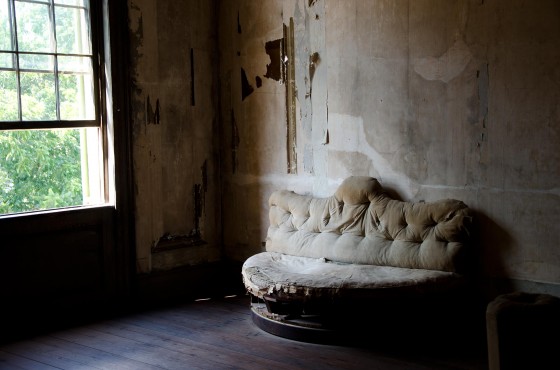 His memory had failed him, he had to struggle a lot to find that place – in the middle of nowhere, it stood there, alone and aloof, like a big condescending judgement. The last time when he was here –  it was years ago.  He didn’t know why he came back to that room after all these years. May be because it reminded him of a time when he was free from all worries, a much simpler time, no wife, no kids, no responsibilities and no share holders haunting his nightmares, he was alone in the world without a care, he didn’t have this high paying job for which he had sacrificed his very soul, he was broke back then, but he was happy.

He looked around, the roof looked like it would fall off any moment. He saw the words written on the wall, “this is a safe place”. He thought back about the time when she wrote that on the wall with a broken charcoal piece. He was lying down on the floor, looking at her, she was dancing around to an unsung song, some music in her head that he couldn’t hear. He tried in vain to remember her, couldn’t place her name or her face, all he remembered was the music he didn’t hear.

He slowly sat down leaning against the wall, closed his eyes, tried to remember the last time, the only time he had ever been here. It was a beautiful memory, something he vowed to never let go. The girl who came out of nowhere, the best conversation he ever had, the bite marks on his shoulders, but he still couldn’t remember what they had talked about, all he could remember was how it made him feel. She had left before he woke up the next morning and he never saw her again. If he was sure of anything in his life, it was that moment, when he knew, he would give up everything he ever had to go back to that room, that night. It made him feel young and whole again.

When they found him the next morning, he was curled up under a pile of roof tiles and debris. On the wall above him were the words – “this is a safe place”;